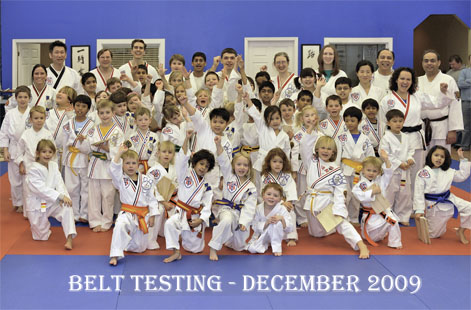 Our goal is to teach not only the physical aspects of Tae Kwon Do, but also the mental benefits. At the ATA Black Belt Academies, all of our certified instructors follow the philosophy that "Every kid is a winner" and "Every kid is special." As part of a nationally recognized organization, our instructors receive continuous training in the latest motivation and teaching systems for a kid like yours. One of the first improvements you will notice in your children is increased self confidence and self esteem.

Above all, Tae Kwon Do classes are designed to be fun, while teaching respect, courtesy, discipline, and improving attention span! Our goal is to introduce your children to an ongoing lifetime sport and to teach them to have "Black Belt Excellence" in all areas of their life.

The American Tae Kwon Do Association was founded in 1969 in Omaha, Nebraska. It now has over 1500 branches, with 300,000 students! The focus of ATA has always been to provide the highest quality martial arts training available, from our superior facilities, to our friendly and knowledgable staff. We provide a safe, positive learning environment that people of all ages can enjoy!

Although its roots can be somewhat traced back to ancient Korea, it is a historic fact that Taekwondo as an organized art is relatively modern. In fact, the only documented history begins in the mid 1900's.

The actual beginnings of Taekwondo are obscured by time, yet many historians believe it originated from a Korean martial arts form known as t'aekyon practiced over 1,300 years ago.

In the early 1900's the art evolved with the introduction of Chinese and Japanese techniques, a practice which concerned some because these influences did not demonstrate the incredible kicking power of the art nor its traditional values or philosophy.

The actual name (and art) of Taekwondo wasn't official until 1955. At that time Korean General Hong Hi Choi organized a movement to unify Korea's various martial arts styles (Called kwans) and presented the name "Taekwondo" to a committee specially formed to select a name for the new art. On April 11, 1955, Taekwondo was recognized as the name for the newly unified, officially recognized Korean martial art.

As an interesting side note, the word Taekwondo itself is made up of three Chinese/Korean words: Tae, meaning to kick or jump; Kwon, meaning fist or hand; and Do, which means "the way". Loosely (if not literally), it can be thought of as "The Way of the Hand and Foot."

In the 1960's Taekwondo began to spread internationally and evolved throughout the late 1900's (along with most martial arts) into primarily a combat sport, although self-defense, fitness, and the philosophy of the practice (including self-discipline and self-knowledge) are still crucial elements of Songahm Taekwondo, the style of Taekwondo developed and supported by the ATA.